Flash Gordon was a big name In tv and on the big screen from the late 30's up until the 80's.More ,less popular,shows and cartoon's would follow up into the   late 90's.The Flash Gordon film that released In 1980 Is what  stands out in my mind the most.That would be my first exposure to the franchise.This figure,however,is based on the 1979 cartoon series. 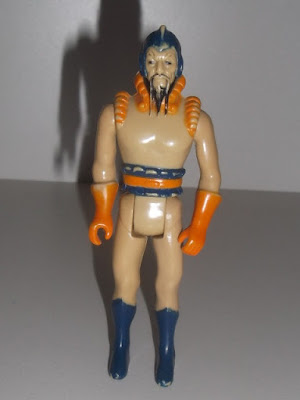 Put aside the fact that my Ming figure is in dire need of some Grecian 5,and take in  its simple awesomeness!The late 70's and early 80's were laden with these types of  minimalistic action figures,thanks to Kenner's Star Wars figures and Mattel.I'm assuming Mattel saw Kenner's successful toy design and followed suit.Ming has 4 simple points of articulation  at the arms and legs.Surprisingly there is no head articulation.In fact,the whole line might  be the same. I think maybe Flash has head articulation.But remember,articulation isn't what grants you a spot on 5.Points.And .Proud.On contraire .Around these parts,ya gotta have 5   points or less.Why do you need a Flash Gordon - Ming figure In your life?